Life has been pretty hectic lately…and I forgot the password for the site.  I am sneaking a few moments whilst the kids on are the trampoline – jumping from the pizza oven onto the trampoline.  Obviously Seth didn’t learn his lesson from when he did it before and ended up needing an x-ray!  Hmmm I’m not sure I have mentioned that in previous posts (because I lost the password!)

June is nearly over, which means we are half way through the year and now on the countdown for dark nights.  I love the light nights….I don’t like putting the kids to bed on light nights.  I have found the kids bedtimes have slowly slipped later and later, mostly because I don’t register time properly because of the light and also because they generally are having fun and getting on with each other.  When they are not getting on it’s easy to send them to bed! Our neighbours gave us a trampoline and now the kids spend loads of time on it.  It’s good because we can go days without having the tv on.  They are even motivated enough not to spend a million hours cleaning their bedroom so that they can get outside.  Rebekah, as always is the teacher, and the kids, as usual, are the pupils.  It’s interesting to watch, mostly because this won’t happen for very much longer, and also because after all these years she has played with the same personality type and they let her.  Every so often there is rebellion, but on the whole they allow her to be the boss.  So our lives right now is filled with the sounds of squeaks from a creaky trampoline and laughter from the playing kids.  Good sounds all in all….maybes not for the neighbours though!

So other news in the Hughes House is wild camping and midge bites.  Rebekah and Adam love wild camping with their Dad, which translates as an airbed in the back of the car.  This year was Hannah’s turn to join them…a fact Rebekah complained about a little too much!  They went to Keilder with the Spencers and had a good and muddy time.  All was kinda ok as they came back with reports of lots of fun and LOTS of midges.  Then Hannah’s body got redder and redder and itchier and itchier….she was covered on every part of her body that hadn’t been covered by clothes!  She looks like she has the chicken pox and this is what people keep assuming she has!  We are using Anthisan,  but the greatest cure seems to be distraction as she hasn’t mentioned anything since getting home from school and playing outside!  I don’t think it has put it off, but she certainly doesn’t like people looking at her and asking her what’s wrong. 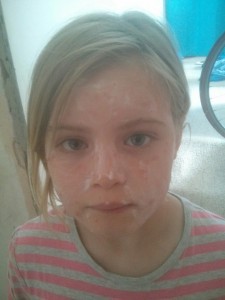 Tonight for FHE we did a demonstration of trying to break a match when it is a single match compared to when the matches are altogether.  I sat with a right thumping heart as they were having a really good go at breaking the ‘family matches’ as I really thought they might actually manage it and that would then be the memory they would have rather than the message we were supposed to be sharing!  From that we discussed doing things together as a family and tried to think of a sentence to describe what we are aiming for as a family.  At the moment Andrew has suggested ‘what we do in life echoes in eternity’, which was on our wedding invitation.  I do love this quote and it means so much of how I feel – but it just feels weird that it is from Gladiator…I wish they could have stolen it from some great thinker or something!  Anyways this is the basis of our family motto for now and hopefully it will help us all understand our eternal significance so that we can be a happier family unit!

We are also on the countdown for the school holidays and also France!  I cannot wait to get to France and get ‘Holiday Mammy’ back!  It will also mean that Andrew stops looking on Ebay for camping equipment…or maybe not!

The kids are now in and we are having our reading time.  Everywhere I look the advice is always to read and so I am trying to help the kids learn that.  Now they are in the arguing and crying as returned and so I must return to being a Mam…only 2 hrs till I start to wind down…surely i can manage that!

One last point before the bedlam of bedtime…July is our reading the scriptures every day month!  We should be good at this by now, but good habits are harder to form than bad ones it seems and so we are renewing our efforts and July seems a good goal post!  We will end it in France and there is no excuse for not reading in the relaxation of holiday!  Good luck Hughes’